In July, for the first time in its history, CDL will be without Mike Thwaites. Mike has been integral to the success of many of CDL’s core programs and to the creation of its unique culture. He’s a great programmer, a great colleague and a great person and his retirement truly marks the end of an era for CDL. 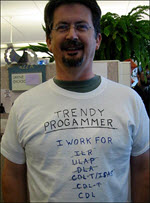 Mike’s history with CDL began at the University Library Automation Project or ULAP for short. This was December, 1978, a time when ULAP was leading the way in library innovation by putting the UC union catalog on microfiche. To do that, Mike and his colleagues wrote programs to clean the data coming in from UC libraries and then organized it to go on to microfiche. This was a huge step forward for the UC libraries. But ULAP wasn’t satisfied and it was soon working on something better.
That something better was UC’s first online catalog, Melvyl. With his colleagues, Mike wrote the code for this system using the PL/1 programming language, an Adabas database and an IBM mainframe. Connected to a first-of-its-kind network composed of telephone lines and microwave dishes this system allowed people at every UC campus to do online text-based catalog searches in real time. Well before the Internet made this type of system ho-hum, Mike and his colleagues worked on the bleeding edge to create a system that would make UC a leader in library automation.
In fact, this work was so impressive that people asked for more from the group that was by then called the Division of Library Automation (DLA). In response to these requests, Mike and his colleagues went to work on two new systemwide projects. These projects provided online access to circulation information and catalog records using the then leading-edge protocol, Z39.50. Again, Mike, DLA and UC were leading the way but the world was catching up.

What provided the next leap forward was the World Wide Web. To take advantage of the Web, Mike and his colleagues developed the Request, UC’s Interlibrary Loan system. This system moved a complex process online and provided access to an ever-broadening list of materials. For Mike, this meant switching to Java and Unix programming while adding to his drawer of computer artifacts that by then included tapes, punched cards and microfiche.
Since the microfiche union catalog was where it all started for Mike, it seems appropriate that Mike’s last major project was creating a union catalog for the HathiTrust Digital Library. Working with his colleagues, Mike developed programs to pull together records for the 15 million+ items in HathiTrust. With so many contributing library records to reconcile, it was a daunting task. But as he had done so many times before Mike stepped up to make things happen.
Of course, Mike would immediately add “I didn’t do anything by myself. I always worked with a team.” And he’s right because Mike is the ultimate team player and he has contributed greatly to the team environment here at CDL. Mike is the first person to ask a newbie, or just a shy person, out to coffee. (And Mike loves coffee. To Mike the local baristas are a part of the team and he knows them all by name.)
He’s always got a funny story, some interesting tidbit of science news or a new math puzzle to share. On a more serious note, he’s always available for code reviews or just to help a colleague work through an idea. At team meetings, he grounds us in the fundamentals and asks the right questions. Most of all Mike puts to work his great interest in religion and ethics as he models for all of us what it means to be a person of integrity.
Whenever Mike is asked why he likes working for the University, he always says it’s because he believes in its mission of teaching, research and public service.   It’s a mission that he has been an integral part of for 40 years.  During those 40 years, through his many contributions, he’s shown how one person can truly make this world a better place.
CDL’s loss is the California Academy of Sciences‘ gain. In retirement, Mike will be swimming with the fish at the California Academy of Science’s Aquarium, using his scuba diving skills to maintain their tanks.  Undoubtedly, the fish will soon start drinking coffee and Mike will soon know all their names. It will be a wonderful new chapter for Mike but a bittersweet one for all of us who have enjoyed working with him during his history making tenure at CDL. 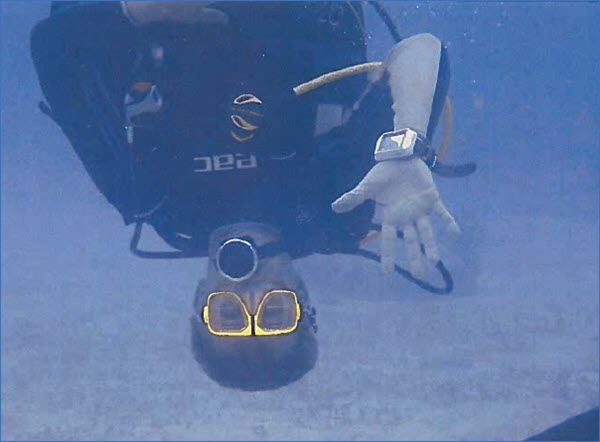