Given its breadth and depth, archiving the web can seem an overwhelming endeavor. Digital curators typically approach web archiving by first determining what to collect based on the collecting scope established by their organization. Once they’ve identified the general theme on which they want to focus their web archiving collection development, they need to assess just what content on the web might be of enduring research value and, as such, would be worth the effort involved in its archiving.

Selecting web-based content for archiving might feel daunting owing to the sheer amount of dynamic information with which we engage online. And web archiving is often time-sensitive – for example when curators attempt to document a quickly-unfolding event and from multiple perspectives. Not a day has passed in recent memory without the potential, if not pressing need, for someone to have the foresight, organizational capacity, and resources to document our social, cultural, and political moment through the ways in which current events are represented online. To build informed, useful web archives, many recent event-driven collecting initiatives have extended calls for nominating websites to the general public. Digital curators can also deepen the research value of the web archives they build by engaging subject specialists and researchers to bring their insights to nominations and collecting decisions. 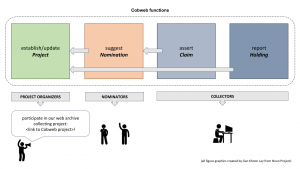 Cobweb supports the distributed work of nominating websites for inclusion in web archive collections by allowing project organizers to establish, describe, and manage thematic (topical and/or event-driven) collecting projects. Cobweb collecting projects can involve multiple organizations and as many participants as organizers need to address their documentation goals. Depending upon curatorially-assigned project policies, participation may be restricted to a set of designated individuals or freely open for public involvement. Cobweb project organizers can be digital curators affiliated with collecting organizations or they may be researchers, community members, activists, or anyone with an interest in participating in documenting web-based content. When just-in-time collecting gets going, project organizers can quickly set up a collecting project in Cobweb and share a project link out through their networks to encourage participation by soliciting nominations and capture capacity to crawl those nominations. Nominators contribute websites of perceived value to a collecting project either when they are included in an established, constrained list of nominators or by engaging in projects with an open, public call for nominations. Collecting organizations with motivation and capacity to include nominated websites to their collections then claim nominations in which they have an interest. It is possible, and often beneficial, for multiple organizations to claim the same nominations. Organizations that have successfully captured nominated websites make good on their claims by having their updated holdings reported back to Cobweb. Again, multiple organizations may hold any given nominated and claimed site.

Promoting visibility across the functions involved in participatory web archiving is a key goal for Cobweb. We’re looking forward to sharing how we’re designing and developing Cobweb to both support and make visible the coordinated steps that go into realizing thematic collecting projects with testers starting this month and in our upcoming project briefing at the CNI Spring 2018 Membership Meeting in San Diego, April 12-13.

To get involved with or simply for more information about Cobweb, contact Kathryn Stine, Cobweb Outreach Manager.