The UC Libraries Digital Collection (UCLDC) project has won a Larry L. Sautter Golden Award for Innovation in Information Technology. The annual award, which is sponsored by the UC Information Technology Leadership Council, recognizes “collaborative innovations in IT that advance the university’s missions of teaching, research, public service and patient care, or that improve the effectiveness of university processes.” The UCLDC project is one of three Sautter Golden Award winners this year. 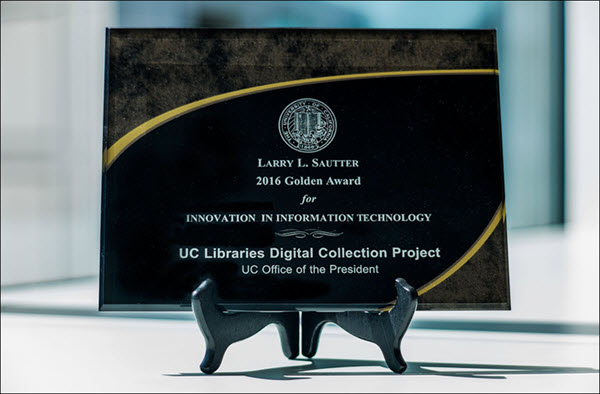 The UCLDC project was a two­-year initiative to establish a technical pipeline for all UC Libraries to create, manage, and provide access to their digital assets. In July 2013, following four years of systemwide planning, a team based at the California Digital Library (CDL) and IST Research Technologies (https://ist.berkeley.edu/ds) at UC Berkeley, in close partnership with staff members at all ten campus libraries, embarked on the project. In September 2015, the UCLDC project team released a set of three production services:

All three of these services are now heavily in use, resulting in broad, aggregated access to an unprecedented number of the University’s most unique and remarkable research collections.

The UCLDC project has helped several campus libraries significantly ramp up their digital collections programs. Since the project’s conclusion in September 2015, four libraries have become highly active users of the shared DAMS; another two campuses are currently in testing. In these first six months alone, the libraries have used the DAMS to manage 68 collections, and to subsequently publish a total of 27 of them to Calisphere—­­18 of which have never before been available online. They include, for example, UC Merced’s Dunya Ramicova collection, one of the few complete collections of costume designs by a single designer held by an academic institution; and UC Riverside’s Sabino Osuna collection, which contains rare glass plate negatives of the Mexican Revolution.

The project has also incentivized campus libraries with their own digital collections platforms to participate in the systemwide aggregation, since the harvester provides an easy way for them to extend access to their materials through Calisphere and the Digital Public Library of America. UC San Diego, for instance, has added over 80,000 items to the aggregation through the harvest in the past six months.

But campus staff provide the most compelling evidence of the impact of this project on their digital collections programs:

“Prior to the UCLDC project, the UC Merced Library did not have a system in place for managing digitized special collections or other digital assets we collect […] We needed to have an easy-­to-­use, cost-­effective system that would handle the variety of formats and complex objects in our collections. Making our content available in Calisphere, where it can be discovered alongside other rich cultural and historical content, rather than in silos, was important to us. […]The UCLDC suite addresses that full range of needs—it allows us to showcase the valuable collections for which we are stewards, with the aim of supporting the University’s three­fold mission.” – Emily Lin, Head, Digital Assets, UC Merced Library

“The UCLDC project has played an instrumental role in helping the UCR Library build and provide access to our digital collections. From the ability to effectively manage our digital assets in Nuxeo to delivering this content online through Calisphere, the UCLDC has provided us with the necessary tools to build effective and accessible digital collections for public consumption. The framework has proven essential to the UCR Library as we strive to provide greater online access to our holdings.” – Eric Milenkiewicz, Manuscript Curator, UC Riverside Library

Meanwhile, the UCLDC project has also had an impact on its ultimate audience: researchers. When the new Calisphere site was released in September, it immediately contained 400,000 objects or 70% more content than in its previous iteration (due entirely to the scalable harvest infrastructure developed). The aggregation has continued to grow quickly in the months since, notably with the participation of new and previously inactive institutions at UC and throughout the state. It now contains over half a million objects, and the rapid pace of growth is on track to continue.

California State Librarian Greg Lucas sums up the excitement around Calisphere from the end-­user perspective: “Calisphere is one of those resources that librarians, researchers and the global public have been waiting their whole lives for without even knowing it. Not only has it brought together an unparalleled array of primary source material, it has done so in a clean, easily-­searchable interface that everyone can use. Calisphere’s redesigned site is, in one word, awesome.” ­

The project implementation team included staff at the California Digital Library (CDL) at UCOP and Research IT at UC Berkeley.

The team worked closely with staff across the UC Library system to refine requirements and test and provide feedback on all aspects of the product. Input was formally coordinated through the following two groups, but many additional individuals throughout the UC Libraries contributed their time and expertise to the project.

The award was presented at the annual UC Computing Services Conference (UCCSC) at UC Santa Cruz in on July 12th.  Learn more about the UCLDC project.