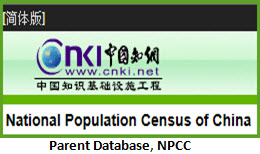 Nine UC campuses (all except UCSF) now have access to the Sixth National Population Census of China Database.

Note: At the present time, access to this resource is presented under the parent database, National Population Census of China, which includes all censuses taken in 2010, 2000, 1990, etc. When a separate URL for this resource is available, SCP will update the catalog records.

China conducts its national population census every ten years; the sixth census was conducted in 2010. The Sixth National Population Census of China Database (NPCC) contains the entire data that was officially released by the Statistics Bureau of China, including population data of the whole country, 31 provinces and centrally administered municipalities, and 2872 counties. Data sets covered include but not limited to gender, age, nationality, permanent residence registration, education level, industry, occupation, social security, marriage, fertility, death, housing, and migration. This is a must-have data resource for contemporary Chinese studies. The release of the database was authorized by the China Statistics Press, the publishing arm of the Statistics Bureau of China. This database is in Chinese and English, is searchable, downloads to Excel, allows browsing and analyzing, and enables in-depth data mining and analytical results can be exported into Excel or Word. The vendor CNKI is a major Chinese resource provider who has contract with UC for several products.

Susan Xue, UCB (sxue@library.berkeley.edu) is the primary contact for this license.