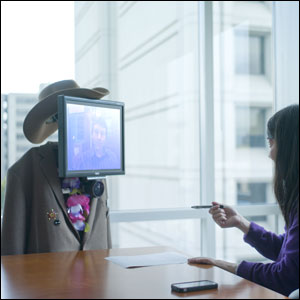 We here at the California Digital Library (CDL) are very serious when it comes to all things digital. Some of our colleagues work virtually so we’ve explored the gamut of long-distance communication solutions. The latest solution, a robot, has been so much fun for us all to experience that we wanted to share it with folks outside our office.

Our colleague, Martin Haye, a Senior Developer who is the mastermind behind some of CDL’s most important open source contributions, such as the XTF search and display framework and the eScholarship back-end systems , has engineered a user-friendly robot that pretty much puts him in our offices without physically having to be here.

Here’s what he told us…

Q: How long have you been working virtually?

A: About four years now. I’ve worked at a distance from the beginning of my time at CDL but at first it was just by email and phone.

Q: You’ve been through a couple of different iterations that I’ve seen- could you tell me how the idea for a virtual you got started?

A: Well, it started out because we moved to an office space that had a really nice counter space and I wanted to take advantage of it. …I wanted to put myself using Skype on a laptop on the counter, plus be portable enough for people to carry me to meetings. But no one actually ever did that because there were too many cords to deal with.

Q: Have you noticed a difference in how people are reacting to this iteration of virtual Martin over any of the other iterations?

A: Lots and lots of people have been talking to me about it. I really like that I’ve been able to achieve the level of personal interaction that I have dreamed of. Before people had to walk in to [my office space] to see my video self or have a specific question to ask me. But now I have a chance for hallway encounters. For example, I encountered a colleague in the hallway and had an ad-hoc conversation that led to a 15-20 minute meeting. But during that encounter laughs were exchanged and a relationship was renewed.

Q: Do you have an official name for your new virtual self?

A: Well, I’m actually just going to say that I’m Martin and if you want to call my medium something then you could say that it’s Martin’s robot. I got the librarian cataloguing stamp of approval for this naming convention. A colleague of ours offered to look up the proper naming convention for such a setup in the AACR2 (Anglo-American Cataloguing Rules, Second Edition) and we came away with the rule about spirits that channel through a medium. Since I am the spirit of this virtual setup, the main name or entry should be my own name and if someone wants to put a name to the robot medium it would just be a secondary name or entry.

Q: Can you tell me a bit about how you built this robot?

A: Well, it all started at Christmas a year ago when I got a robot kit as a Christmas gift. It had an aluminum base with a motor and wheels. But it took me over a year to design and implement the setup that you now see. I wanted the robot to be tall enough so that I could talk with people at a conference table and I wanted it to have a pretty substantial base so that it wouldn’t tip over.  To make it tall enough I created a shape like an oil derrick so that’s what you’d see if you took the jacket off.  The power system was the most challenging component and I had to experiment with a couple of different solutions.  I wanted something that would allow me to be mobile, reliable, and safe. One system design would have been too much of an electrocution hazard. I finally settled on a hefty uninterruptible power supply (ups). Next, I included a plain old monitor on the setup, and a Mac Mini to run the video software that allows you to see me. Finally, I have two cameras attached in front and back. The front camera has a fish eye lens and can see 180 degrees both horizontally and vertically. The back camera is pointed down and helps me when I want to back into my work space where I connect the plug to the electrical outlet for charging in between my little forays around the office.

Also, the video conferencing system is something that I’ve programmed myself based on open source software.

Q: What’s been the most challenging part of the robot? Have you had any accidents?

A: Maneuvering is definitely a challenge. Sometimes I can’t see very well and I bump into a lot of walls. One time I brushed a postcard off of someone’s wall when they weren’t there and I couldn’t pick it up. I drove back later to apologize and that was fun.

But for the most part it’s been an enormous success and a really great way to interact with my colleagues.

Next time you’re at the CDL offices, be sure to stop by to say hello to Martin.