GBS at the Crossroads: What Now, What Next? 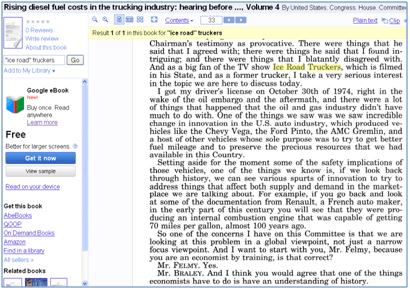 One year ago last February just days before the Google Books Settlement Fairness Hearing, I wrote a blogpost fancifully titled Hurtling Toward the Finish Line:  Should the Google Book Settlement Be Approved? In the ensuing weeks and months as we all sat back to await the Court’s ruling and that act of hurtling turned into a very long haul,  I’ve had to trade in my Winter Olympics-inspired metaphor for one more reminiscent of an episode of Ice Road Truckers: an interminable and wearying slog on treacherous roads through inhospitable territory and constantly-shifting weather.  Four days ago on March 22nd, that arduous journey reached a new fork in the road with Judge Denny Chin’s decision to reject the proposed Amended Settlement Agreement.

As I read the Court’s opinion, Judge Chin’s decision appears to turn on four main elements:

Judge Chin went on to suggest that he would consider approving the Settlement if it were changed to an ‘opt-in’ rather than an ‘opt-out’ regime, removing the above objections, and he encouraged the parties to revise the Settlement accordingly in order to preserve what he also acknowledged as the Google books project’s many benefits.  (The Association of Research Libraries has also prepared a usefully concise summary (http://policynotes.arl.org/post/4044100808/judge-rejects-proposed-settlement-in-google-books).)

What path things will take next, no one yet knows.  The publisher plaintiffs have issued a statement (http://www.publishers.org/main/PressCenter/Archicves/2011_March/GoogleBooksSettlementStatement.htm) indicating that they are prepared to modify the Settlement to satisfy the Court;  the Authors’ Guild has also indicated its interest (http://www.authorsguild.org/advocacy/articles/scott-turow-on-google.html) in a revised agreement that can breathe new commercial life into out-of-print works.  Google has yet to weigh in definitively, saying thus far (http://www.mediabistro.com/galleycat/tag/hilary-ware) only that it is disappointed in the ruling and is studying its options.  A status conference before the Court is scheduled for April 25th, approximately one month from now.

Meanwhile, many of Google’s major research library partners in the U.S., including the University of California, have voiced their unwavering commitment to the digitization of their collections both for preservation purposes and for the advancement of teaching, scholarship, and the public’s access to information.  You can read here the statements from UC, Stanford (https://lib.stanford.edu/google-books/stanford-initial-statement-decision-amended-settlement-agreement-google-library-project), and Michigan.  These and many other Google library partners are also members of HathiTrust, a shared preservation and access repository for the digitized book collections of its now more than 50 member libraries (8.4 million volumes and growing, 2.2 million of which are in the public domain).  HathiTrust has issued its own statement affirming its commitment to a shared digital future enabled by largescale digitization of member library collections.  More discussions among all of these players will surely take place over the next days and weeks.  And digitization continues.

What do I think about all of this?   Although I’m certainly no legal scholar, I share the view expressed by many other knowledgeable commentators that Judge Chin’s analysis was probably correct and possibly unavoidable.  (Two of the most cogent legal commentaries can be found in this post from New York Law School’s James Grimmelmann and in a Chronicle of Higher Education interview with UC Berkeley’s Pamela Samuelson.) Nonetheless, it’s also the case that the legislative process has thus far been unable to produce the critical reforms needed to admit orphan and other long out-of-print works into the digital ecosystem.  The Settlement was an opportunity to advance such reforms—through private action, true, but with many safeguards in place for rights holders, and the strong possibility of follow-on legislation to generalize an approach to orphan works.  If the parties agree to an opt-in regime, the value an institutional library subscription will be significantly diminished, and Google’s competitors may be less motivated to join libraries in pressing for orphan works legislation than they might otherwise have been.

There are two potential silver linings in a possible opt-in future.  Rights holders, their prerogative no longer questioned, may suddenly find themselves flocking to be let in rather than left out, leading to the inclusion of more recent works in the Settlement services than might otherwise have been the case (including perhaps, if non-U.S. works are reintroduced into the Settlement, some foreign works that now make up the lion’s share of the mass digitized corpus). This could produce a more tightly-scoped Institutional Subscription providing full-view access to a set of relatively recent works that would otherwise be unlikely to enter the digital domain in the near term, with appropriate compensation to rights holders.  Second, excluding orphan works from the Settlement will give libraries a freer hand in making determinations about appropriate fair use of this material.  If orphan works legislation succeeds, the benefits to and constraints on libraries are likely to be significant improvements over the Settlement’s terms.

A recent analysis of the HathiTrust corpus by John Wilkin of the University of Michigan Library attempts to put some numbers to these categories.  Part informed analysis and part guesswork, Wilkin’s estimates, largely intended to inform the orphan works debate, suggest that as many as 50% of the books held in U.S. research libraries may be orphan works, a third of them published in the U.S.  For the 5 million titles in the HathiTrust corpus, this translates to 800,000 U.S. orphans and 2.5 million orphans overall. The total numbers in GBS would of course be larger, perhaps two times as large or more.  (A separate analysis by industry expert Michael Cairns estimated the number of orphan works at roughly 580,000.  Cairns analysis draws a distinction between ‘titles’ and ‘works;’ the former are much larger than the latter, since the same work can appear in many variant editions and formats.)

What about the potential opt-ins?  Wilkin’s analysis suggests that in-copyright books in HathiTrust eligible for opt-in treatment (i.e. with known rights holders) comprise on the order of 22% of the total. In HathiTrust terms, this would still equate to something approaching 1 million titles if both U.S. and non-U.S. works were included, but fewer than 300,000 if the Settlement remains restricted to (or attracts) U.S. rights holders only.  These figures also include many works still in print, leaving the number of out-of-print books eligible for inclusion in an Institutional Subscription still smaller (some estimates put the number of in-print works at about 5%).  Again, these figures would be larger for the Google Books corpus overall, perhaps by a factor of two.   This is a best case scenario, since requiring rights holders to opt in would be a labor-intensive and years-long process.  Whether the swiss cheese of an opt-in regime excluding orphan works will provide a sufficient financial incentive for Google and the plaintiffs to go forward is something we’re about to learn in the coming weeks.

A Change in the Weather

In the meantime, the world has changed greatly since the Google Settlement was first announced in 2008, and new avenues for surfacing the world’s books are emerging.  In my earlier blog piece, I argued for approval of the Settlement, but I also asserted that its rejection would not be a make or break event for libraries.  I still hold that view.  In the long interval between the original Settlement proposal and now, many leading actors have developed alternative visions for a future universal digital library.  HathiTrust has emerged to assert its stewardship over partner library collections, at a scale that rivals Google’s.  Many libraries in Europe and elsewhere around the globe have been motivated to invest in largescale digitization of their own national literatures—tellingly, not a few of these in partnership with Google.  Robert Darnton at Harvard has exhorted us to set our sights on a national digital public library free of commercial entanglement and has galvanized a vibrant community around that vision.  The Internet Archive has recently launched a promising digital lending library partnership.  And legal scholars such as UC’s own Pamela Samuelson have begun crafting proposals for copyright and orphan works reform that may further unlock the doors to our cultural heritage.  A redoubling of legislative effort toward this end is, in my view, the most important action we ought to pursue; and the timing couldn’t be better.

Whichever path one favors on the next leg of this journey, Google’s enterprising vision has been and remains a key animating force behind all of these initiatives. As the Ice Road Trucker fan whose 2008 Congressional testimony appears in my GBS clip at the head of this article said:  “…if we look back through history, we can see various spurts of innovation to try to address things that affect both supply and demand in the marketplace[.]”  Even some of Google’s staunchest critics have acknowledged that Google’s contributions in this arena have been an important gift, seeding further innovation (see for example Peter Brantley’s comments in the last paragraph of this article).  Without GBS, the digital books ferment all around us would assuredly look very different than it does today.